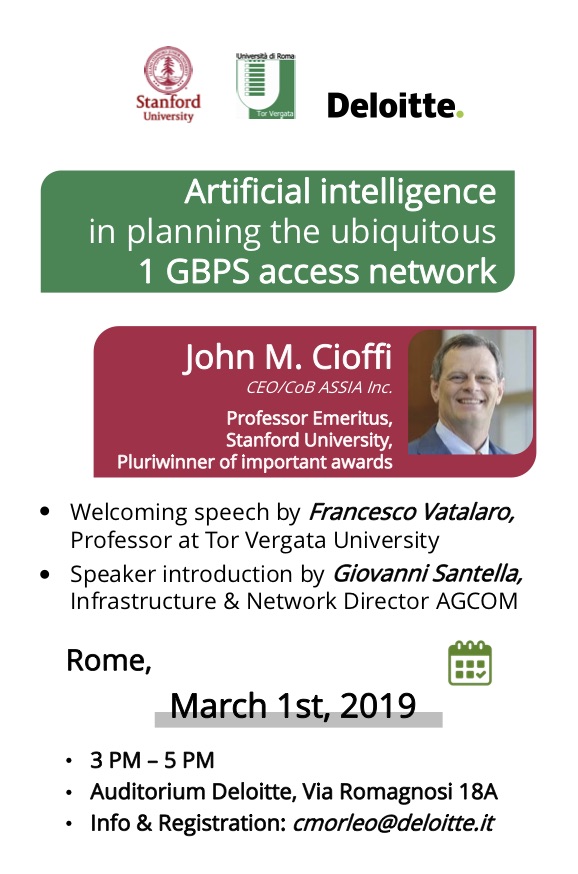 Access networks evolution to ubiquitous 1 Gbps can profit from the use of data sciences, both analytics and optimization. A range of both fixed and wireless access-connectivity options exist and no single choice is most efficient. Thus, the continuous artificially intelligent use of network data can augment planning exercises to make economical choices for access network evolution. This talk will review some of these methods and suggest possible gains and strategies that might be pursued to accelerate efficiently progress towards the ubiquitous 1 Gbps goal.

John M. Cioffi taught Stanford’s graduate electrical engineering course sequence in digital communications for over 20 years from 1986 to 2008, when he retired to emeritus. Cioffi’s research interests were in the theory of transmitting the highest possible data rates on a number of different communications channels, many of which efforts were spun out of Stanford through he and/or his many former PhD students to companies, most notably including the basic designed used worldwide on more than 500 million DSL connections. Cioffi also over saw the prototype developments for the worlds first cable modem and digital-audio broadcast system. Cioffi pioneering the use of remote management algorithms to improve (over the internet or cloud) both wireline (DSL) and wireless (Wi-Fi) physical-layer transmission performance, an area often known as Dynamic Spectrum Management or Dynamic Line Management. Cioffi was co-inventer on basic patents for vectored DSL transmission and optimized MIMO wireless transmission. In his early career, Cioffi developed the worlds first full-duplex voiceband data modem while at Bell Laboratories, and the worlds first adaptively equalized disk read channel while at IBM. His courses and research projects over the years centered on these areas.